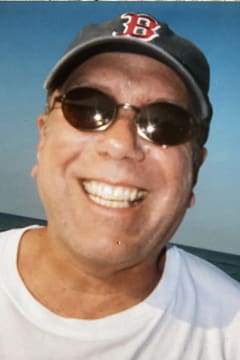 Rogers, Robert E. of Arlington on October 20th. Beloved husband of Gail M. Rogers (Sullivan). Loving father of Kelley Rogers of Arlington, MA and her partner Patrick Gill and Terence Rogers and his wife Holly Adinoff of Arlington, MA. Brother of Debbie Cipriano and her husband Peter of West Haven, CT, Chris Rogers and his wife Eileen of Westwood, and Peter Rogers and his husband Ron Squibbs of Vernon, CT. Also survived by many loving nieces, nephews, family and friends. Relatives and friends are invited to visit in the DeVito Funeral Home 1145 Mass. Ave., ARLINGTON on Tuesday from 9 - 11 am and to a funeral home service at 11 am. In lieu of flowers please consider a donation in memory of Robert to the Jimmy Fund at jimmyfund.org or Dana-Farber Cancer Institute, P.O. Box 849168, Boston, MA 02284-9168. Please visit devitofuneralhome.com for an online guestbook.

Bob was born in Hackensack, NJ, the son of Norton and Janet Rogers. He grew up in New York, New Jersey and Connecticut with his two younger brothers Chris and Peter and his sister Debbie. Bob graduated from Muhlenberg College with a degree in History where he was a member of the Phi Kappa Tau Fraternity and made lifelong friends with his fraternity brothers. Bob played lacrosse for Muhlenberg. Bob received a graduate degree in Education from Lehigh University and taught first and fourth grade at Norristown Elementary School in PA. Bob also taught high school mathematics at the Pine Ridge School in Vermont. In his early 30’s, Bob received a degree in Computer Science and graduated Summa Cum Laude from Champlain College in Burlington, VT.

Bob was married to Gail Sullivan in 1980 at the Highlands Estate in Ft. Washington, PA. They lived in Pennsylvania for 5 years, had many great friends from his years at Muhlenberg College and spent time enjoying the restaurants, music and sports of Philadelphia. He was there when the Phillies won the World Series in 1980.

In 1982, Bob and Gail moved to Burlington, VT. He loved living in Vermont in their home close to Lake Champlain where he raised two wonderful children; Kelley and Terence, and two sweet golden retrievers; Jessie and Mogul. He enjoyed skiing, ferry rides on Lake Champlain searching for “Champ” and going to Shelburne Farms and the Shelburne Museum.

The Rogers Family moved to Arlington, MA in 1995. He was so happy to live close to his family. Wonderful times there included lots of family celebrations, vacations to Seabrook, NH, school events and lots of baseball and soccer games. Without ever having played soccer, Bob became a well-respected coach for Arlington Youth Soccer and coached for many years. Bob also adopted another golden retriever named Nikki while living in Arlington.

Bob was passionate about sports, especially the Red Sox, the Patriots and the NY Giants. He considered himself fortunate to be living in this area to enjoy three World Series and six Superbowl wins. Bob was also an excellent tennis player and played a pretty good game of golf. Bob most recently enjoyed the Family Day at Fenway Park with Gail, his daughter Kelley and her partner, Patrick Gill. He truly enjoyed having his photo taken with the World Series trophies and sitting in the dugout.

Bob loved traveling. He favorite places to visit included Key West, Seabrook Beach, Newport, RI and Denver, Colorado, where his son and daughter-in-law Holly Adinoff own Bob’s favorite restaurant – Sullivan Scrap Kitchen. Last summer, Bob celebrated Terence and Holly’s wedding with family and friends at a beautiful ceremony in Breckenridge, CO. Bob also had a special place in his heart for the Jersey Shore. His grandmother, Madeline, would take Bob and his sister Debbie on vacations to Asbury Park when they were young. Bob loved the ocean and the warm summer weather. He was known to venture further out into the ocean than anyone else, at the hopes of body surfing a big wave. He enjoyed driving a scooter all over Key West, hanging out on the beach with lots of friends and family, diving into large waves, and eating oysters, clams and scallops at Petey’s in Rye. Bob also learned how to ride a motorcycle when he was sixty years old. He loved riding and would take Gail on rides out into Concord and Lincoln.

Bob’s greatest pride was his children, Kelley and Terence. Both of them are loving, kind, hardworking, and good people, who would do anything for the people that they love, just like their father. As they say, the apple doesn’t fall far from the tree.