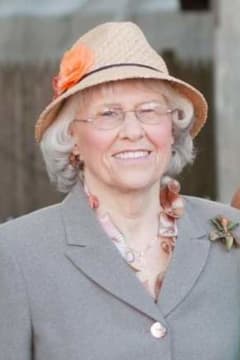 Banks, Joan L. of Arlington, passed peacefully at home on January 3rd after a long illness from Alzheimers. She was 87 years old.

Beloved daughter of the late Roger and Helen Darcy; sister to the late Darcy Richards (aka Ruth Darcy); wife of the late Thomas R. Banks. Loving mother of Paula M. Delcore of Arlington and John F. Brescia and his wife Joyce of Oxford. Also survived by her granddaughters Rebecca Wood and her husband Ben; Julianna Parvani and her partner Kelly, Bailey Brescia, Jennifer McPherson and Elizabeth Brescia.

She was especially happy when visited by her great grandchildren Madi & Henry Wood and Sophia & Rex Parvani. They brought her so much joy! She was also lovingly known as Aunt Jo to her nephew Chuck Bonini.

Joan was a lifelong resident of Arlington graduating Arlington High School in 1953 and instead of leaving she went right to work at AHS until she retired 34 years later. Her favorite story was to tell how it took her 38 years to get out of high school.

Joan was a Delegate to the Democratic Conventions on numerous occasions and was very involved in local politics as well. Joan also participated as a member of the Catholic Women's Club and was very involved in her church. She was handy with a hammer and a sledgehammer knocking things down and building them back up. She was sometimes referred to by her family as "strong like bull".

She always "did the best she could with what she had" and was a firm believer that when times were tough, "this too shall pass". She will be missed.

Relatives and friends are invited to her funeral mass on Saturday January 14th at 10 am in St. Agnes Church. In lieu of flowers, please make a donation in memory of Joan to Alzheimers Association at alz.org/donate. Please visit devitofuneralhome.com to view an online guestbook.