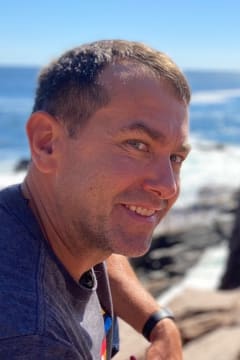 Daniel Thomas Winkler, 46, the high-energy source of love and laughter for his family and friends, and of software engineering brilliance and leadership, died on Sunday, April 3, 2022. He lived in Arlington with his loving wife, Regan, and their daughters, Leah and Caroline.

Dan filled his life with striving and achievement but was most happy and proud when surrounded by his family. With them the good times rolled often. His positivity, caring and sense of fun nourished family and friends alike.

Dan was born on February 23, 1976, in New Orleans, Louisiana, the seventh of eight children, and grew up in the greater New Orleans region. He settled in the Boston area in 1994 after arriving to attend Northeastern University. He graduated in 1999 with a major in electrical engineering and with lifelong friendships birthed in his engineering fraternity, Beta Gamma Epsilon. He was an Army veteran, enlisting in the Mississippi National Guard in 1993, where he learned to be an electrician. He transferred to the Massachusetts National Guard and served part-time until honorably discharged in 2001.

Dan was vice president of software engineering at 6 River Systems, a warehouse technology and robotics company based in Waltham. He joined 6 River in 2016 as one of its first employees and became a pioneer in robotics and supply chain technology. Before that he worked for 16 years at Mimio, a Cambridge teaching technologies company. Colleagues at 6 River praised him not only for his ability to create clean, simple solutions to complex problems but also for his warm way of developing friendships and mentoring others.
Dan’s interests ranged widely. He loved woodworking, fishing, boating, playing the piano, making espresso coffee, skiing and athletic competition. He tackled each with enthusiasm and intensity – and acquired the equipment and gadgets to match.

Dan and Regan met in Boston and married in New Orleans on April 20, 2012, in a sunny, fun-filled ceremony complete with a traditional New Orleans brass band and second line. Dan’s love of all things New Orleans was widely known, from his loyalty to the Saints, to an annual spring crawfish boil, to the Jazz Festival posters and Mardi Gras throws in their home.

Dan passed away while competing in the Ironman 70.3 Texas triathlon in Galveston. In addition to Regan, Leah and Caroline, he is survived by his mother, Mary Golden Gonzales; stepfather Tim Gonzales; siblings Pete Winkler, Terry Winkler, Katy Blalock, Alice Wiesner, Beth Winkler and Hank Gonzales, and a large, often boisterous clan of cousins and in-laws. Dan was preceded in death by his father, Peter Winkler, and a brother, David Winkler.

A visitation will be held on Monday, April 11, 4-7 p.m., at the DeVito Funeral Home, 1145 Massachusetts Ave. in Arlington. In lieu of flowers, the family requests that donations in Dan’s name may be made to the Massachusetts Military Support Foundation (mmsfi.org) or Girls Who Code (girlswhocode.com).