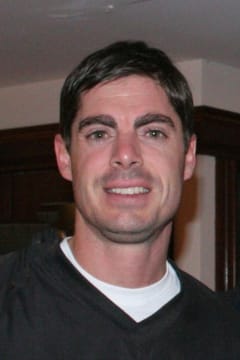 Chauncey (Chad) Depew Steele IV of Chelsea, Massachusetts passed away surrounded by his loving family at Massachusetts General Hospital in Boston on September 1, 2021 at the age of 51.

Born in Boston, Chad spent his youth in Brookline and Cohasset Massachusetts. He graduated from Noble and Greenough school in Dedham, Massachusetts and received his undergraduate degree from Columbia University in New York City in 1992, where he was a proud member of the Beta Theta Pi fraternity.

In college, Chad majored in Classics and continued to develop what would become his lifelong interest in the ancient world, leading him to make numerous visits to Italy and Greece to follow his passion for the history, architecture, and relics of the ancient Greeks and Romans.

In 2000, Chad received his law degree from Suffolk University Law School and embarked on an outstanding career as a litigator, working at the downtown Boston law firms of Cetrulo and Capone and then Craig and Macauley. Chad was recognized by Boston Magazine as one of Boston‘s Rising Stars under 40.

Despite Chad‘s love of the law, his true passion was teaching and in his late 30s he gave up his law career to teach in the Boston Public Schools, eagerly taking on the challenge of the most difficult teaching environments. Chad particularly loved opening the eyes of his students to the rich and fascinating history of the ancient world and his students were devoted to “Professor Steele“.

Chad had an outstanding athletic career. He was selected to the Massachusetts State Boys soccer team and played varsity hockey and football at Nobles. In his senior year he was named to the Patriot Ledger All Scholastic team, was awarded the Independent School All League Award, and was selected to the all-state scholastic football team, playing in the 1998 Shriners All-Star Bowl. He then went on to become a three year starting varsity defensive back for Columbia University. The highlight of his career was his freshman year game against Yale when he intercepted two passes, recovered two fumbles, and scored two touchdowns. After college Chad took up tennis and participated in the National US Father and Son Championship at the Longwood Cricket Club with his father. Later in life he became an avid golfer and traveled to many destinations to play golf with his much loved Beta fraternity brothers. Chad was a devoted fan of the New England Patriots, the Boston Bruins and the European professional soccer leagues.

The family wishes to thank the caregivers at Massachusetts General
Hospital for their dedication to and affection for Chad at the end of his life. If desired, memorial donations may be made to the Center for the Study of Traumatic Encephalopathy Fund at www.bu.edu/alumni/giving .

There will be a private interment for Chad at the Mount Auburn cemetery at 1 pm on October 23, 2021 and a celebration of life Memorial Service at 3:30 pm at the Unitarian Universalist Old Ship Church in Hingham center at 90 Main St.