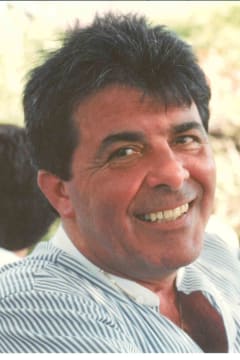 CHARLES J. COPELOTTI (1931 – 2023)
COPELOTTI, Charles J. Of Waltham, formerly of Lexington and Woburn, died peacefully on January 2, 2023. Son of the late Charles and Ida N. (Bergonzi), both originally from the Parma region of Italy. Father of Andrew J. (Michele) of Newton, Denise R. Chatfield (Jeffrey) of Duxbury, and Lauren M. Confoey (Colin) of Wellesley. Brother of the late Mary Garafalo and
Irene Enrico. Charlie is also survived by 7 grandchildren, Ella and Jacob Copelotti, Audrey, Sophie, and Mason Chatfield, Finley, and Avery Confoey. He is also survived by his brother-in-
law, Leo Enrico of Topsham, Maine, and his companion Helen Farrell of Arlington, MA. Charlie was born and raised in Lexington, where he graduated from Lexington High School in 1949; he then served 4 years in the Air Force during the Korean War, stationed far away from home in Tripoli, Libya. He returned to Lexington, where he lived at 28 Pearl Street until marrying Sheila Holland of Winthrop, MA, in 1964 and moving all the way to 30 Pearl Street in a home he built with his brother-in-law and cousins.
In the early years, Charlie owned and operated a truck, delivering groceries to small stores in and around Boston; later in life, he was a carpenter and bartender, working the last 25 years of
his career for the 99 Restaurant chain, first in Lynnfield and then Billerica. Most of the early family years were spent working 2 jobs; his work ethic over a 60-year career was his unspoken
lesson to his children and grandchildren. He relished spending time working on his yard and
home in Lexington. As a family, winter ski trips in New Hampshire were a source of enjoyment while raising his family. Visiting Hours will be held on Monday, January 9, 2023, at the DeVito Funeral Home, 1145 Massachusetts Ave, Arlington, MA 02476, from 4 pm to 8 pm. Relatives and friends are kindly
invited. Burial will occur on Tuesday, January 10, 2023, at 11 am at Westview Cemetery, Lexington. Please meet at the front gate. In lieu of flowers, please consider donating to the
American Stroke Association (www.stroke.org) or via mail to: American Stroke Association PO
Box 840692, Dallas, TX 75284-0692.