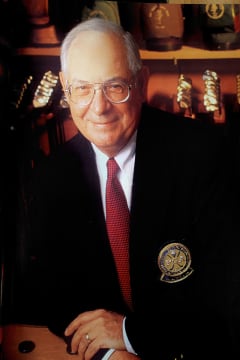 Anthony M. "Tony" Morosco of Arlington, MA, passed away unexpectedly on October 19, 2021. Born May 28, 1936 to Joseph and Pauline Morosco in Fairmont, West Virginia. Tony found his passion in life at the age of ten when he discovered the game of golf as a caddy. He would go on to have a distinguished career as a PGA Professional. He was an accomplished player having several New England PGA championships to his credit, including the 1976 New England PGA and the 1993 NEPGA Seniors.

Tony was head professional at Belmont Country Club (1970-83) and Weston Country Club (1984-2001), while simultaneously serving as head professional at Indian Creek Country Club in Florida. He was New England PGA Vice-President (1974-76), Secretary-Treasurer (1977-78), President (1979-82) and PGA America director representing the New England, Connecticut, and Northeastern New York Sections (1978-89 and 1996-98). Tony donated much of his time to raise money through golf charity events such as coordinating the Greater Boston Business Charity Golf Tournament (1983-98) making it the longest running and most successful one-day Pro-Am charity event in the country. His excellence as an all-around premier golf professional was recognized in 1980 and in 1999 when he was named New England PGA Golf Professional of the Year, and in 2001 when he was named PGA of America Golf Professional of the Year. In 2001, he was inducted into the New England Section PGA Hall of Fame.

Tony leaves behind a legacy of great leadership, a great teacher, a great golfer, and an even better person. He was known by his friends as a person of integrity, kindness, and patience.

Tony will be missed by his loving family, Myra Elliott Morosco, his wife of 52 years; their two adult children, Victor and Alexia; his brother William Morosco of Miami Shores; nephew Rhys and Jackie of Stevenage, England; as well as all his friends both in and out of the golf community.

He will be greatly missed.

In lieu of flowers, please consider a donation to the Francis Ouimet Scholarship Fund at ouimet.org. Funeral services are private.