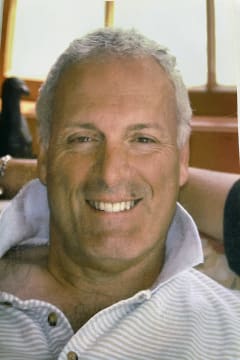 Al’s death was nearly a year after that of the greatest love of his life, his confidant, partner, and wife, Lynn D’Ambrose. Al will be remembered as someone always concerned about helping others.

Al Perry, known affectionately to friends as “Alfredo,” was born to Alfred “Perry” Pereira and Mildred (Correia) in Lowell, MA, the eldest of seven children. His father was a three-time decorated World War II veteran.

Al served in the military during the Vietnam war era. In the mid-1960s, he moved to Boston where he worked at the Jazz Workshop for the fabled impresario Fred Taylor, beginning a lifetime friendship between the two. Al was a great fan of jazz and met many of the top musicians of the day at the club. Later, in 1967, radio host Ron Della Chiesa, program director of the then Boston classical music station, WBCN, which stood for “Boston Concert Network,” hired Al. When WBCN began playing rock music in 1968, Al worked as a late-night announcer and also sold commercial time. “I was trying to learn a lot of different things and basically looking for my niche in radio,” he recently told an interviewer. Soon after, Al was promoted to sales manager and then general manager of the station, providing critical leadership for the young and iconoclastic – and often uncontrollable -- staff of the now legendary free-form rock radio station during the height of the 1960s counterculture and anti-Vietnam war era. While not much older than the rest of the staff, Al took it upon himself to be the “adult in the room” in the words of former colleagues, both to shield the federally-licensed radio station from problems with the FCC, and to ensure there would be enough advertising revenue to pay salaries and bills.

Following Al’s passing there was an outpouring of remembrances from friends and colleagues on social media, particularly regarding what one person called Al’s unique gift of being able to “make people feel seen and heard,” and citing his “caring, humanity, and perhaps most of all his service to all, including even those he did not know.” Over and over the remembrances read
"I barely knew Al, yet. . . "; "I met Al and he took an interest in
me . . . "; and “I was young. Al gave me a chance. He believed in me.”

In a tribute on Facebook, former WBCN staff member David Bieber recalled Al’s generosity and kindness: “Al moved mountains and still found time to play in the sandboxes of so many people’s lives—college kids who took a lifetime detour to radio stardom, record moguls, media tycoons, concert producers, the French fryer who flipped burgers at Flash’s and performers who enchanted him, from Peter Wolf to Neil Young, and, of course, Mr. Muddy Waters,” with whom Al developed a particularly close friendship over the years. One of Al’s favorite stories was about the night he was visiting with Muddy Waters in a dressing room before a performance, as Muddy was playing his guitar while Bob Dylan, who was there, was trying to sneak a look at Muddy Water’s unique fingering on the instrument – and the blues performer was having none of it.

Al left WBCN in 1976 and worked at radio stations in New Hampshire and Maine as well as in the record industry.

The true love of Al’s life was his wife Lynn, who was remembered at her passing last year as “smart, beautiful, warmhearted,” and who like Al “showered those in her world with love and kindness.”

Al and Lynn were introduced by friends, and on their first date, they went to see live music -- a passion they continued to share for the rest of their years. They were married in 1986, and for their honeymoon, they stayed at the Carlyle in New York City and saw the legendary Bobby Short perform there. In addition to New York, Al and Lynn traveled around the world including Tanzania, East Africa and New Zealand/Great Barrier Island. On their last international trip, they toured Portugal, discovering the delights of Lisbon, the Algarve, the famed Portuguese food and wine, and Portuguese blues (Fado) music.

Al was also a dedicated tennis fan, attending the US Open regularly, and closely following the other major tournaments, while maintaining a lifelong friendship with the late-tennis journalist Bud Collins.

In recent years he worked closely with the producers of a documentary film and book on the early days of WBCN, and took delight in going to see the film several times in a theatre in Lowell, not far from where he grew up.

A private service for family and close friends will be held in the spring. In lieu of flowers, his family has requested in-memoriam donations to the HART Fund of the Blues Foundation, Memphis, TN or to a charity of your choice. Please visit devitofuneralhome.com to view an online guestbook.